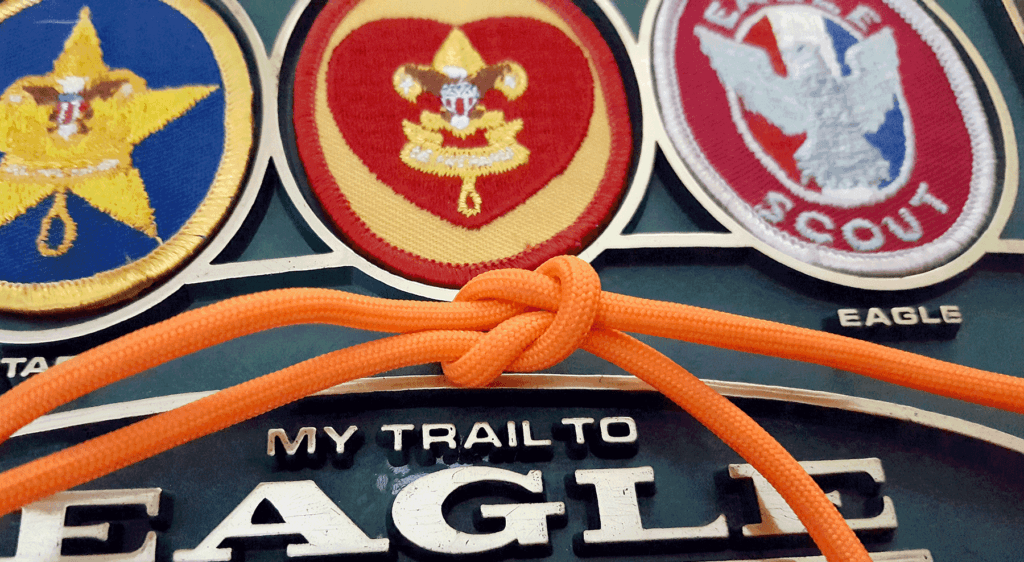 It’s no secret that the Boy Scouts of America have had a great influence on me. I learned about setting goals, public speaking, working as a team and of course… A plethora of outdoor skills.

When it came to learning scouting skills, I truly enjoyed fire-building, orienteering and shelter building. But the skill set that attracted me the most was pioneering.

I would see the older scouts building entrances and gateways to our campsite using nothing but the tree limbs found on the ground and, of course, some rope. They would raise their patrol flag, to seemingly skyscraper heights! All that was required was a couple of poles and some ropework (lashing).

During dinner chow time, I would see scouts using tripod lashing to build a cooking station for our Dutch oven meal. I was amazed by what my fellow scouts were constructing with their pioneering skills!

I was eager to help out my troop members… BUT there was very little that I could do since I had zero pioneering skills.

My assistant patrol leader saw that I was a bit down because of my inability to help out on the current mission. He explained to me that I was only a Tenderfoot Scout and that we all had to start somewhere. He quickly had me fetch my Boy Scout handbook out of my tent and handed me a 3 foot piece of rope.

He opened up to the pioneering section of the handbook and turned to the knot tying page. He gave me a small speech on how I needed to crawl before I could walk. He saw the puzzled look on my face and realized that he needed to explain a bit further. With a now aggravated tone in his voice he stated, “You need to learn certain knots before you could get good at lashing poles together, dummy!”

I quickly gathered my handbook and cordage. I headed to a nearby tree and began studying the knots that he recommended.

As I progressed through the ranks in the Boy Scouts, I learned to tie many different knots. It seemed that every time I met a Scout from a different troop, we had knots to exchange. Some scouts were collecting patches while I focused on collecting knowledge. That focus on knowledge has served me well till this day.
Once I attained the rank of Eagle Scout, I began teaching at Boy Scout summer camp. I worked various areas from the Nature Lodge to the Aquatics Area. But as you may have guessed by now, my favorite place to work was at the Pioneering Station.

There are 7 specific knots that I learned on my trail to becoming an Eagle Scout. After teaching countless scouts of all ages and skill levels, one thing seemed to hold true about these 7 knots… Anyone that took the time to learn them would be good to go for most projects in the outdoors.

Here are 7 knots that every Eagle Scout knows, and so should you:

The square knot is quite popular in scouting. It is usually the first knot that a scout is taught because of its simplicity. It is also featured in many different awards that are presented or earned by members of the scouting community. 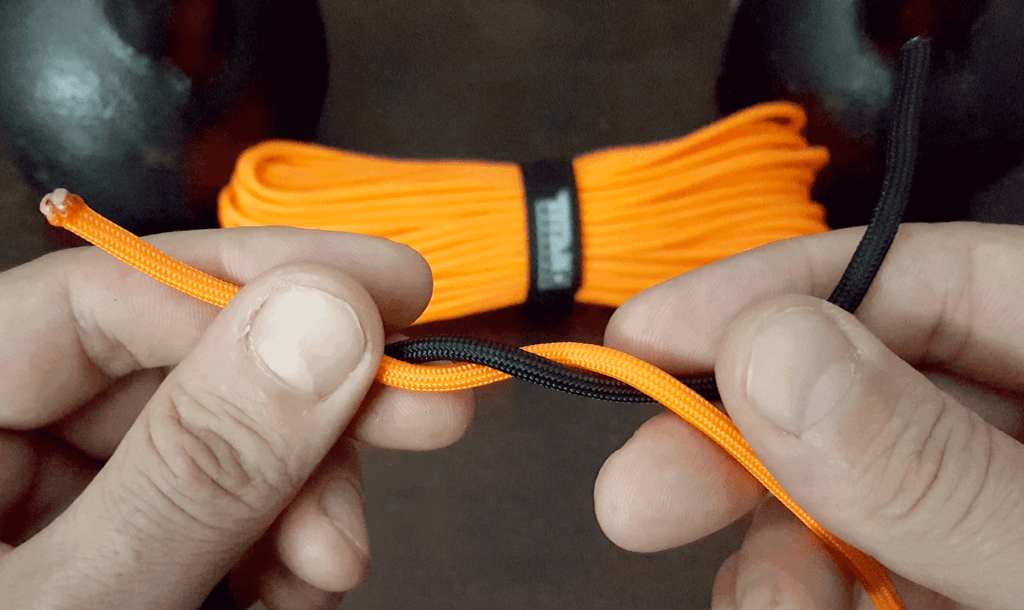 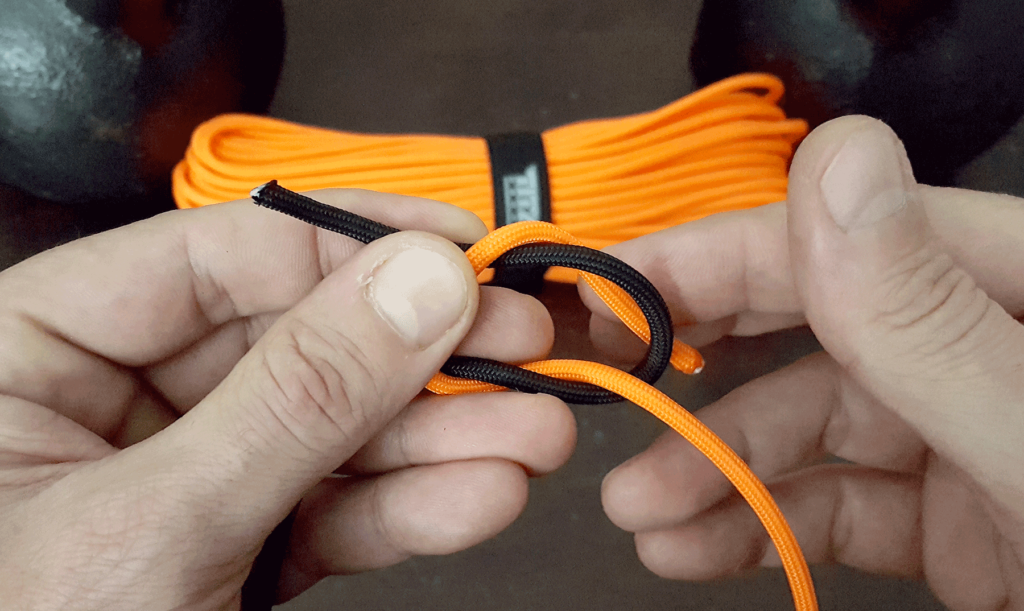 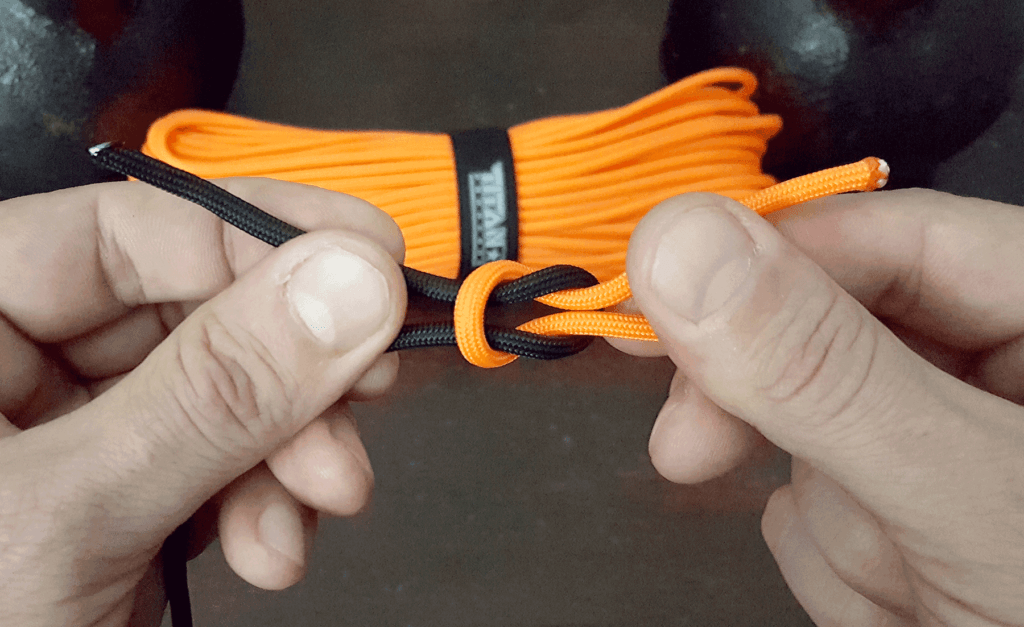 I can still hear my patrol leader mumbling the words to me… “Right over left, left over right and you’re done!”

The square knot was originally taught to me as a way of binding 2 ropes together that were of equal diameter. After years of tying the square knot I would rather use other knots for that purpose.

What I do like about the square knot is it’s ability to make a great First-Aid knot for tying cravats and bandages. It cinches well with items such as a shemagh and bandanas. It also comes apart rapidly when needed. All that you have to do is pull on the 2 ends and slide the knot through. 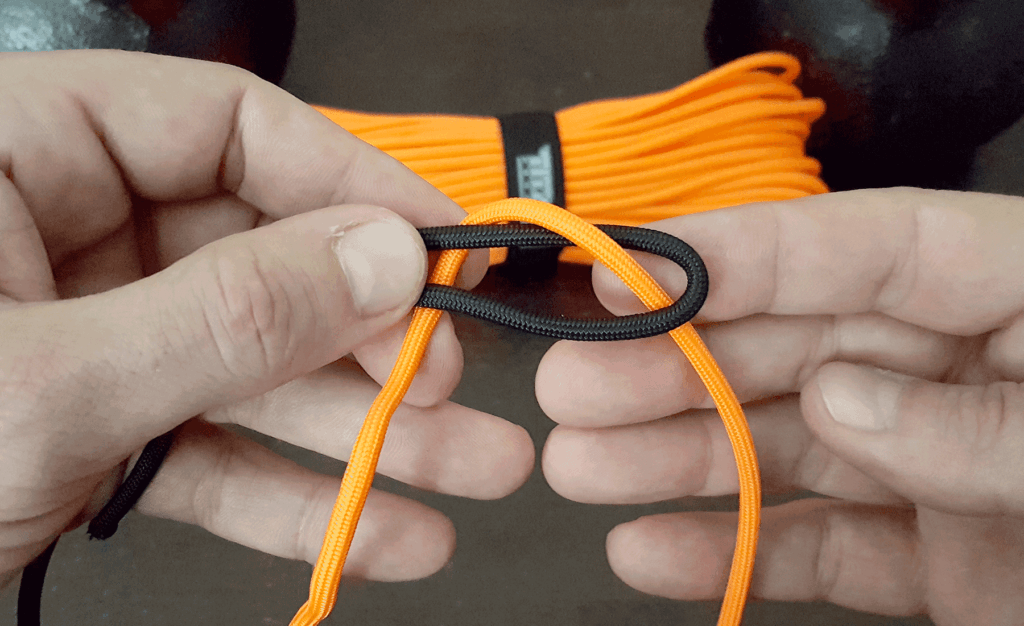 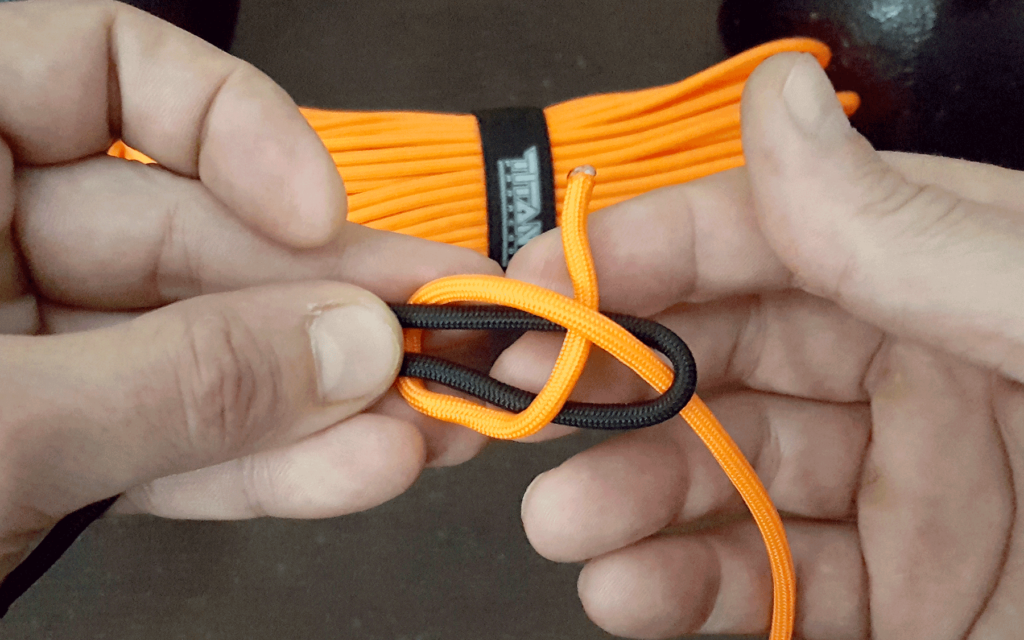 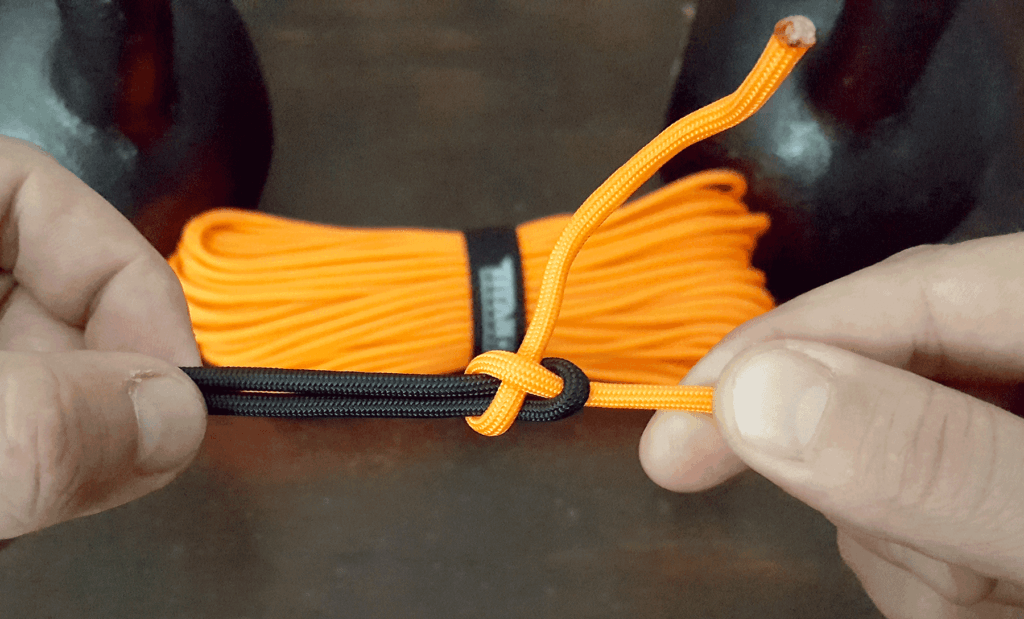 After plenty of practice and experimentation, I would say that the sheet bend would be my go-to knot for tying 2 ropes together over the square knot… Regardless of their diameter. As long as both ropes are under a load (tension from opposite ends) the sheet bend is certainly a capable knot for the job.

Just like many knots that I have learned to tie, the sheet bend has its origins in seamanship. The sheet bend would be used in bending ropes to sails or sheets. It is also a great knot to use for mending fishing nets that have come apart. 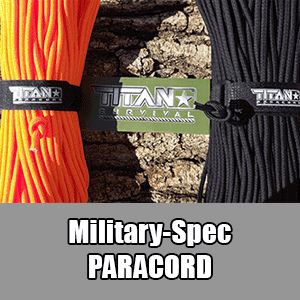 One lesson that I learned from the boy scouts, that I find myself conveying to Warrior Zero Project members, is to NEVER cut your rope unless it’s a must! Tying separate pieces of ropes together with knots is an option but if you can keep your cordage in one piece, it will greatly increase the integrity of your rope. 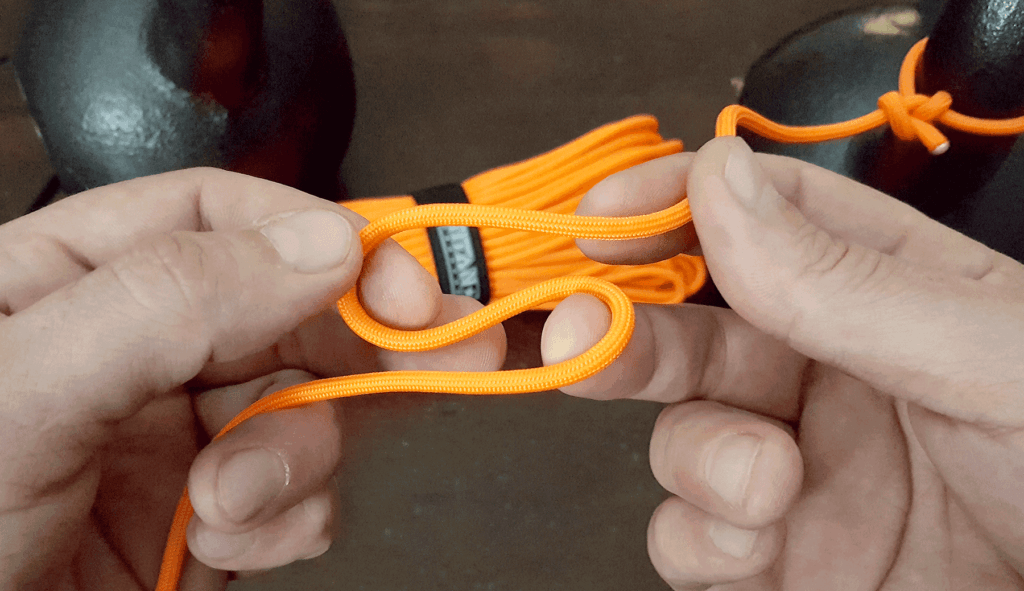 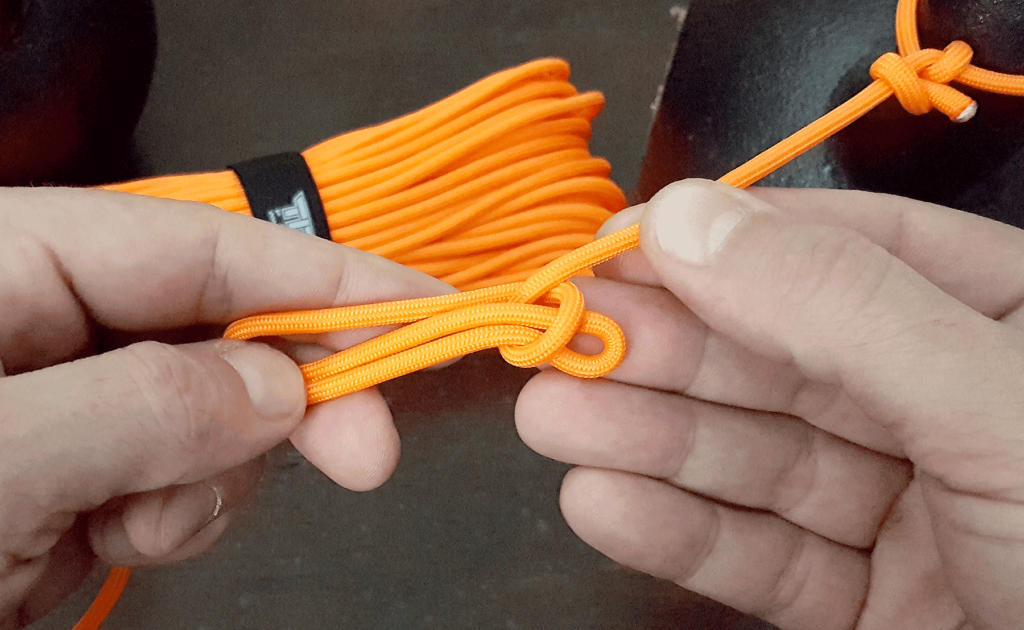 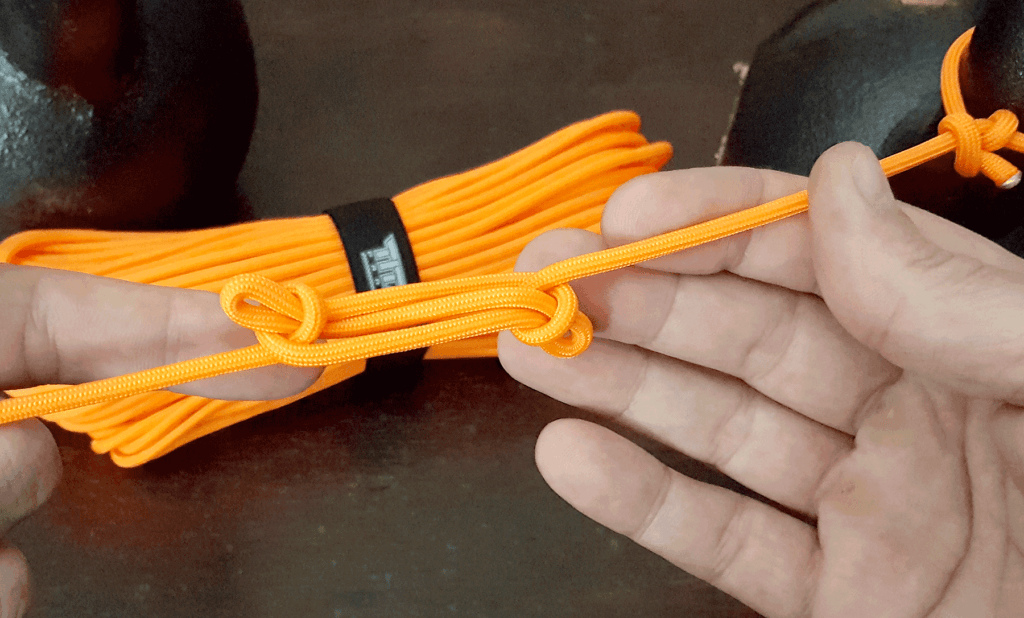 With the use of the sheepshank knot, you can shorten the length of your rope and also use it to remove excess slack. Keep in mind that this knot will come apart if both ends of your rope are not taught.

Basically, if I have both ends of my rope tied to a tree and the middle of the rope is loose, I tie the sheepshank knot in the middle which enables me to shorten the rope, hence, removing the slack. This keeps my rope in one piece which gives me much more stability with future projects when I am utilizing that same rope. As people focussed on preparedness, we want our gear to be as functional as possible. In an emergency, we will not be able to order new cordage from Amazon or visit our local, big box store. Keep your knife away from your rope and you will find yourself at a greater advantage when in a survival scenario.

A clove hitch can be used to tie off the running end of your rope. If you need to adjust your rope, a clove hitch is a good knot to utilize for that purpose. However, my main purpose for the clove hitch is for when I am lashing. 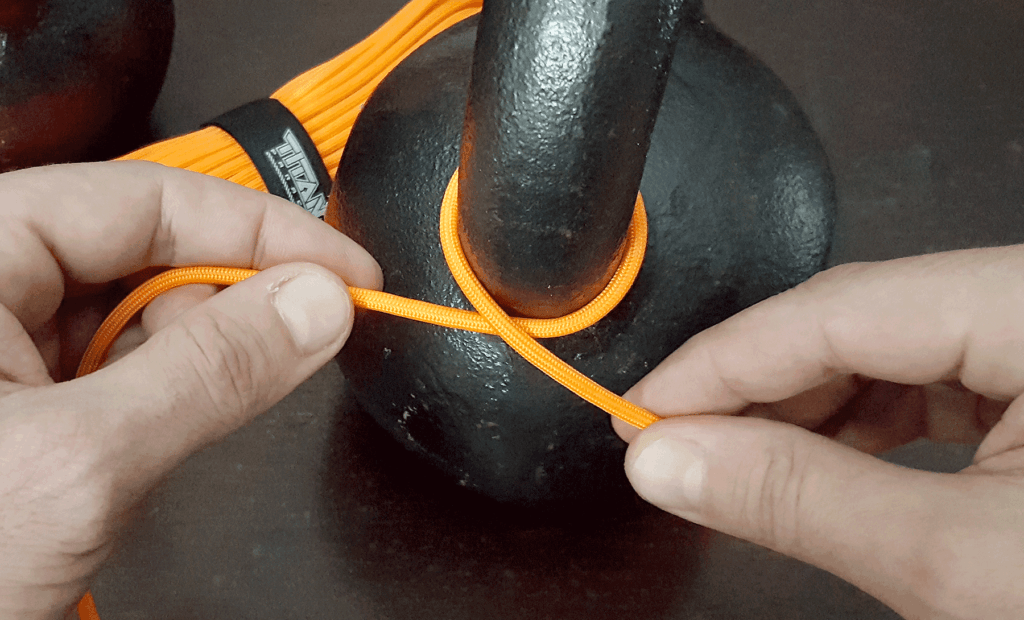 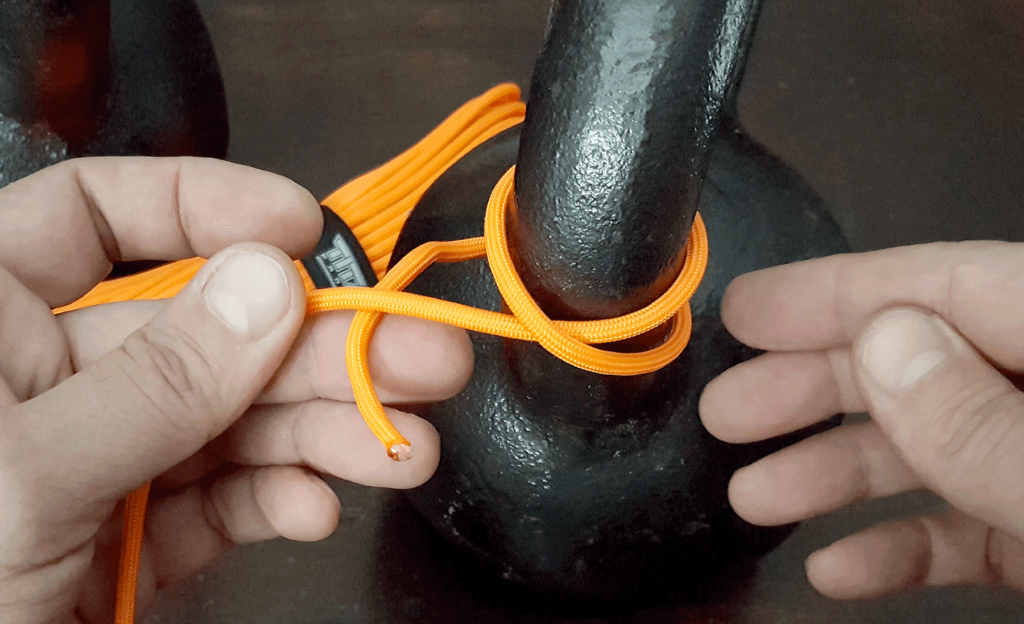 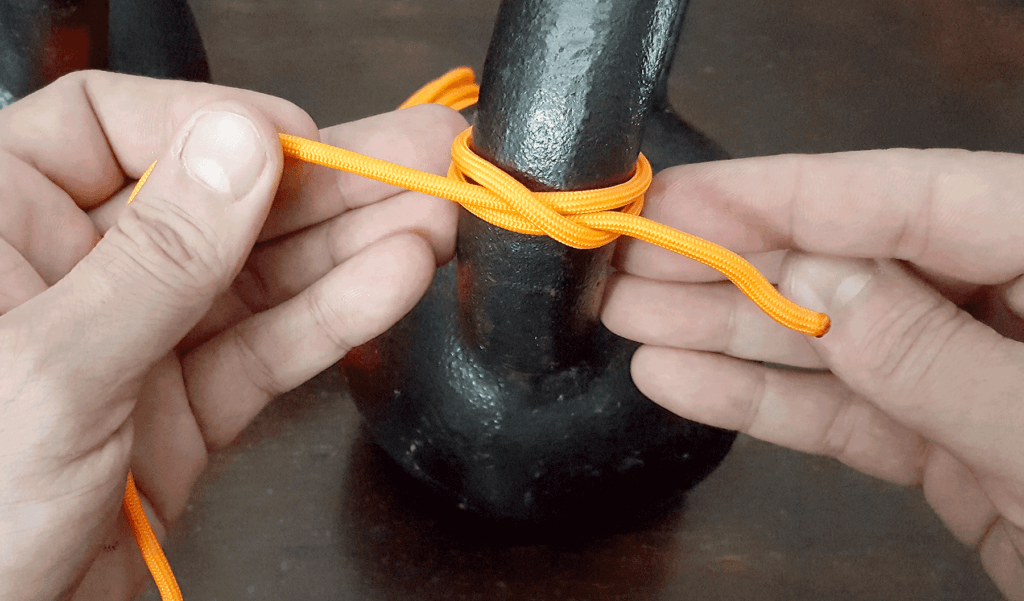 Lashing is used to join structures together using rope. Lashing can be used for scaffolding, fences, building shelters and pretty much anything else that you can conjure up.

The bowline knot was taught to me as a rescue knot. At our annual Klondike Derby, where boy scouts from various troop compete against each other in scouting skills competitions, we would have to rescue one of our fellow patrol members utilizing a bowline. 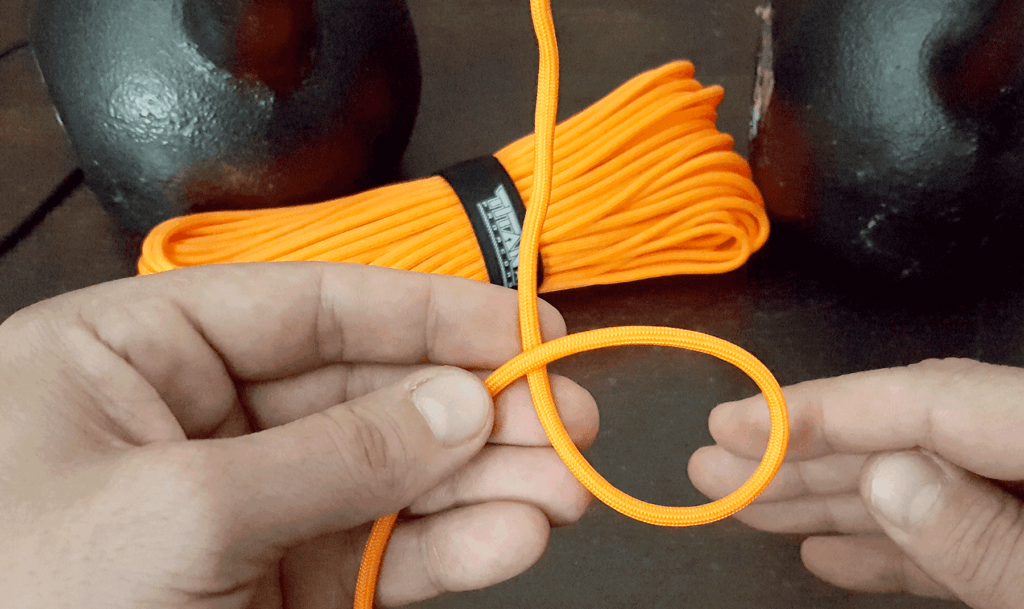 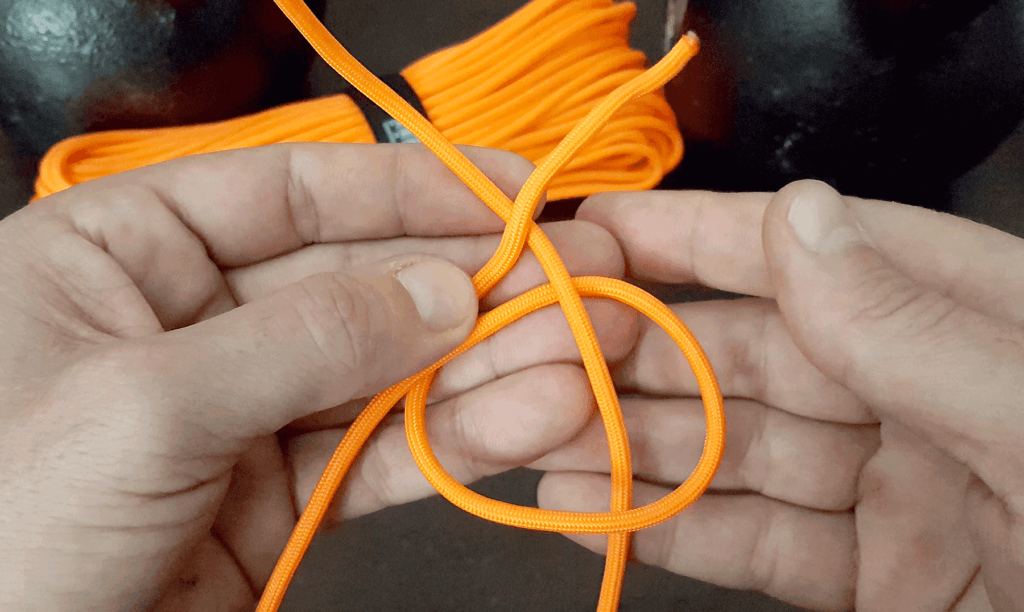 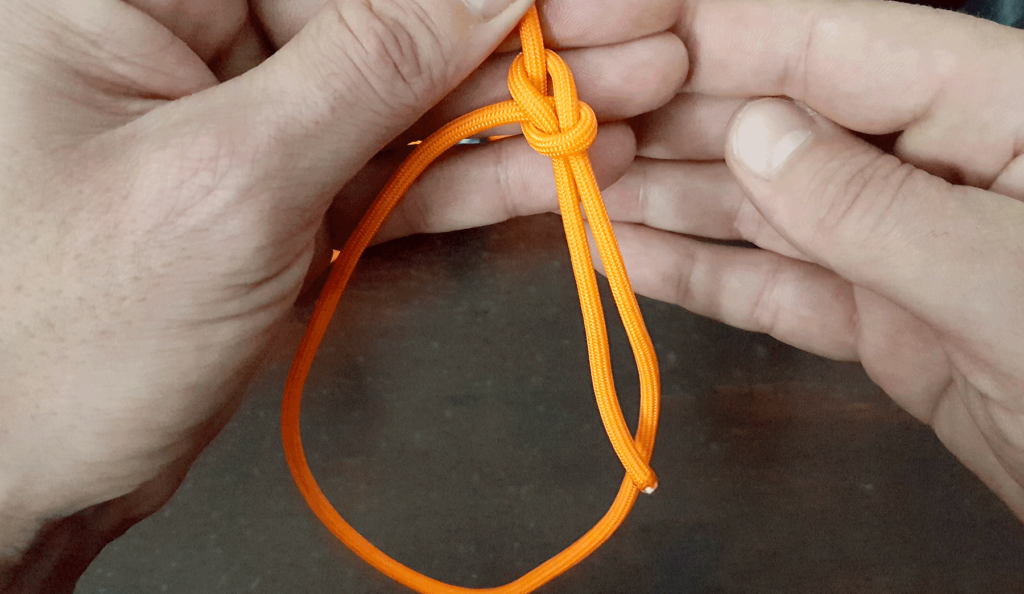 The scenario was that he had been stranded on thin ice while aboard his sled. We would have to throw him a rope as we held onto the one end. The scout being rescued would have to tie a proper bowline around his waist and we would pull him and his sled across the thin ice mimicking an actual rescue.

The bowline is also a simple knot to tie. You form the letter “b” with one end of the rope. You then grab the other end a picture a rabbit coming out of the hole in the “b” he then goes around the tree “stem of letter b” and back into the hole of the letter “b.”

It is a bit easier to tie the bowline with 2 ends of the rope, But in our Klondike Derby, the person being rescued had to work with only when end of the rope and tie a bowline around themselves. That version was a bit more complicated but still relatively easy after a bit of practice.

The taut-line hitch is an adjustable knot which is viable for maintaining tension on your rope. Because of that feature, it makes a great knot for cinching down your tent lines. Using that same principle, I also use the taut-line hitch for tying down my tarps and rain flies. 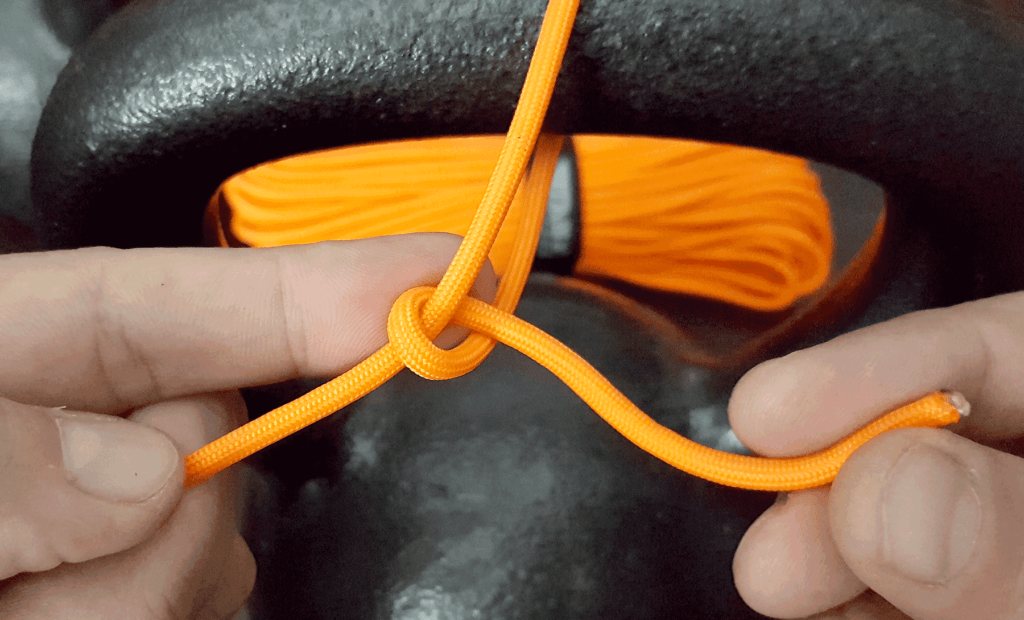 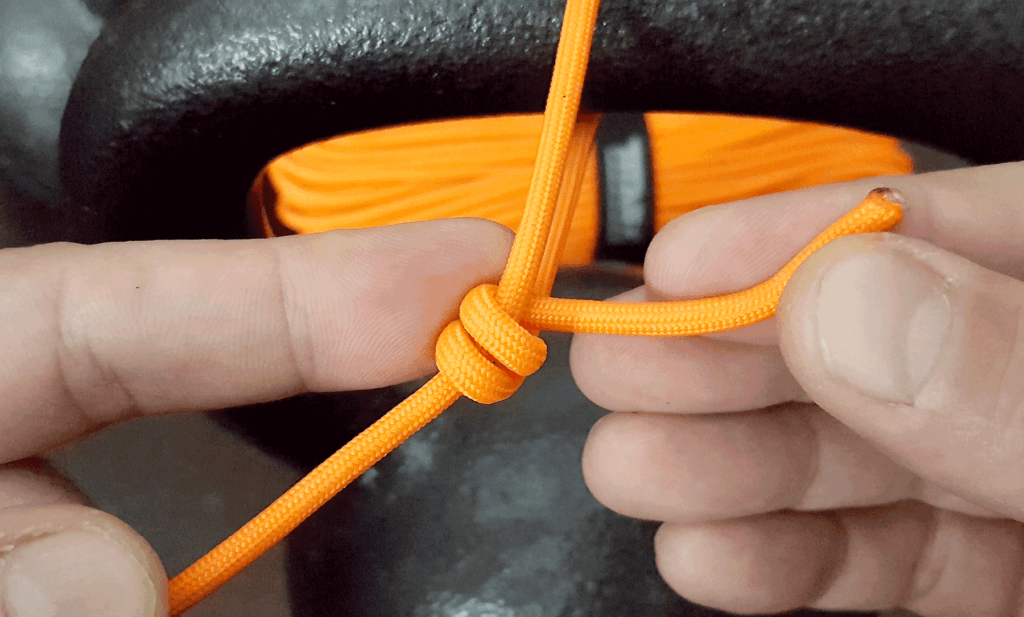 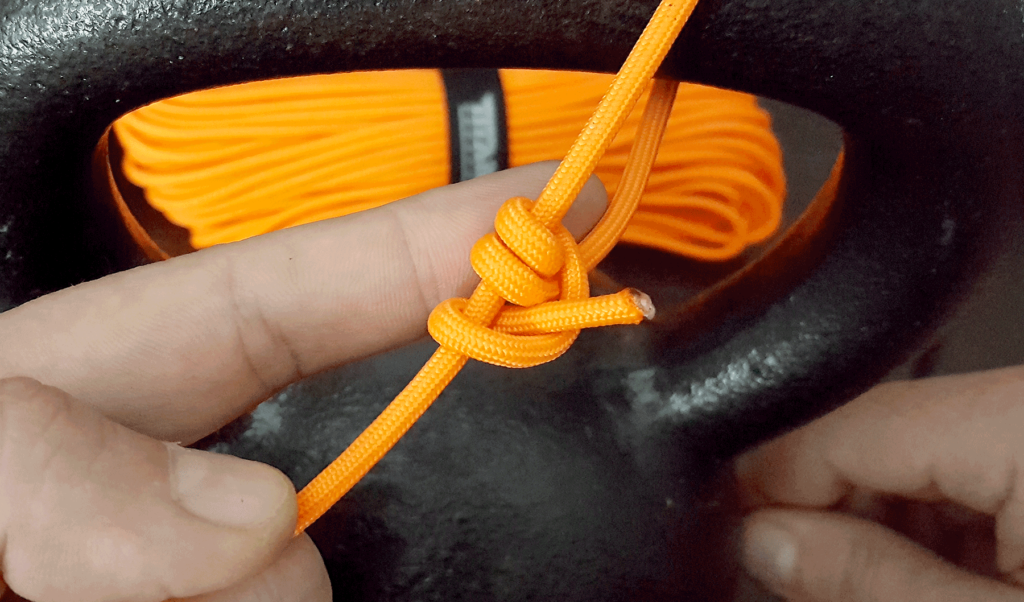 The fact that it is adjustable, makes it ideal for repositioning your shelter or other gear used for protection from the elements. Instead of having to re-tie your knots, especially in bad weather, you can just quickly adjust your taut-line hitch.

The timber hitch is another knot that I find myself using often while I’m in the field. It is useful for me when I am dragging big logs to my campsite. This is key when I need serious fuel for my campfires. With the use of the timber hitch, I save time and energy by getting my fuel to my saw & axe area in one maneuver. 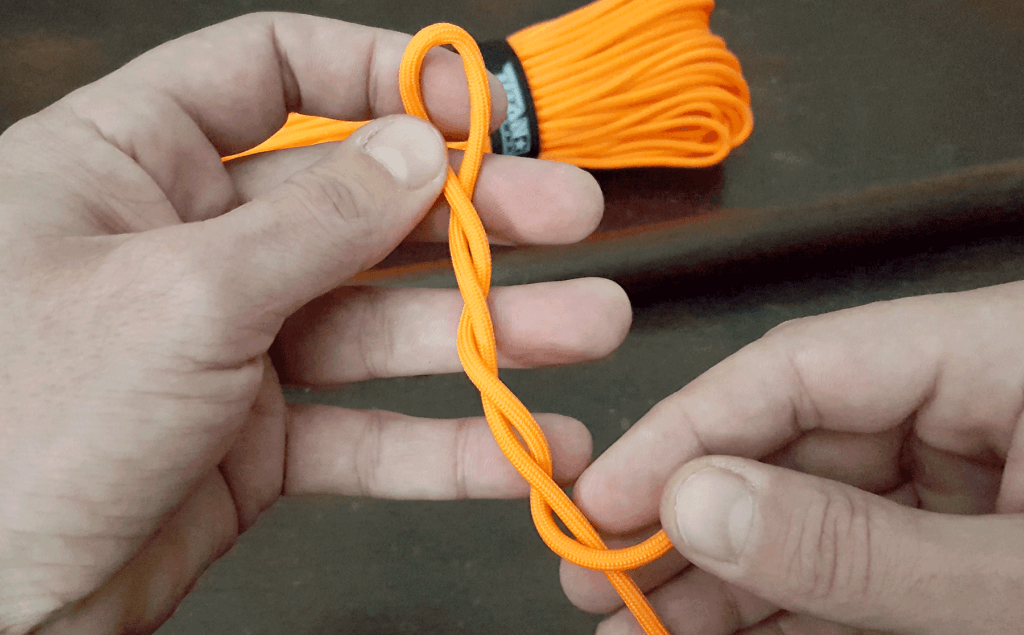 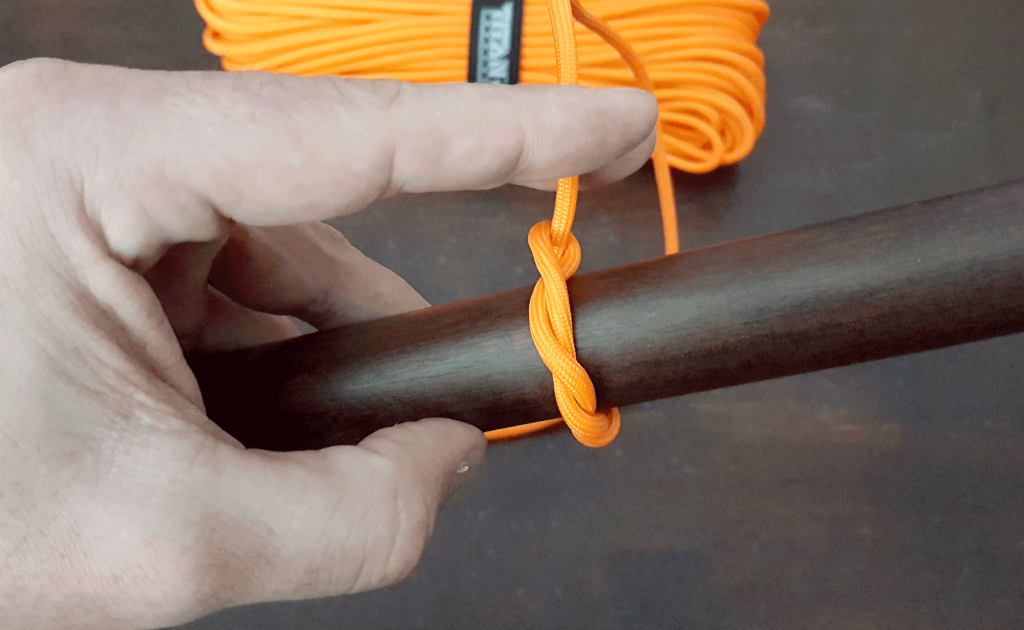 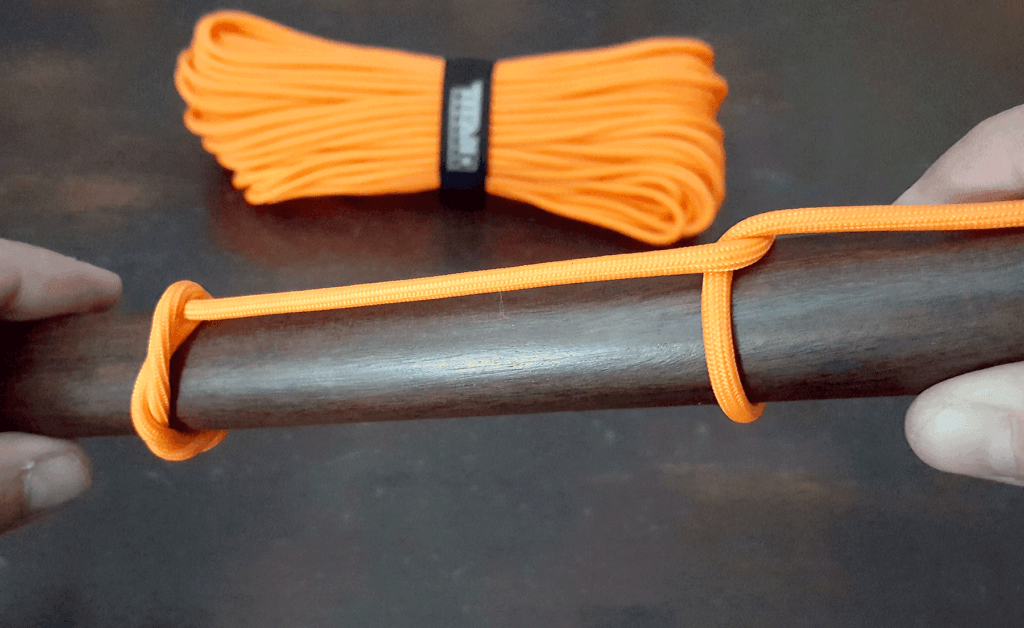 If I cut my fuel into manageable pieces that I can carry, it would take multiple trips for me to get the job done. I would also have to saw or chop my wood in a place where it may be unsafe to perform those duties. With the use of the timber hitch, I can prepare my campfire fuel in a designated and safe environment. I can also utilize bigger pieces of wood due to the close proximity to my fire ring as opposed to cutting according to what I can carry.

There are countless knots that have viable uses. Unlike my time in the Boy Scouts, you can just perform a simple search to learn how to tie some if not all knots.

I chose to share these specific knots with you because they had a big impact on my interest in pioneering. That interest gave me a huge advantage when I became a United States Marine. While my fellow Marines were going over some of these very same knots at Marine Mountain Warfare Training School, I was sent onto the next level of training. I was training with elite special forces units simply because of my previous background in pioneering.

I have since added many useful knots to my toolbox… But it all started with these 7 knots on my trail to becoming an Eagle Scout.

Just like any skill, knot tying and pioneering skills are perishable. Practice every chance that you get and share your knowledge with your loved ones. Take it from me… The more that you teach, the more that you will learn! 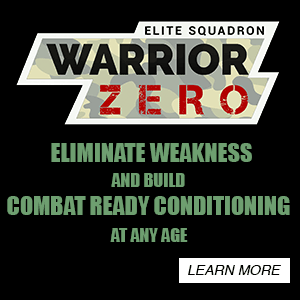 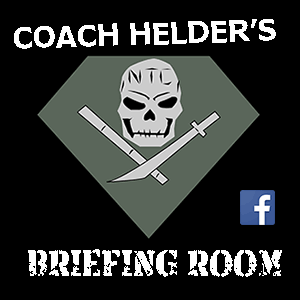